The Van Gogh Museum is one of the most popular and visited places in the capital of the Netherlands - Amsterdam. There are about 200 paintings, 500 drawings of the master. As well as documents and correspondence of the artist. In addition to the works of the famous painter, here you can see the canvases of his famous contemporaries Gauguin, Monet, Picasso and others.

BiographyVicent of Willem Van Gogh(Vincent Willem van Gogh) is controversial, like all his work.

Born into a wealthy priest's family, he could not get a decent education. Under the patronage of friends, acquaintances and relatives, Van Gogh periodically took decent positions. But he could not come to terms with the fate of a clerk or an employee.
One of the highlights of his life was his missionary work in the poorest mining village of Paturage in Borinage in southern Belgium.Drafting a petition in defense of the miners cost Vincent his place.

It was this event that became a turning point in the psychological state of a young man.

The artist's path begins. Studying at the Brussels Royal Academy of Fine Arts lasted only one year. The thought firmly stuck in my head that in order to become great - you should not spend time studying a lot and work hard. Returning to his parents, he shows an enviable ability to work.
Here new disappointment and shock awaits him - he was rejected by his beloved. And the persistent continuation of courtship led to the fact that his relatives asked him to leave.
Van Gogh moves to The Hague and continues to paint a lot. Takes several lessons from famous masters. Constant travel, dissatisfaction and poverty follow him on his heels.

Due to the lack of money, the sitters had nothing to pay with. Hence such a large number of self-portraits - 35. 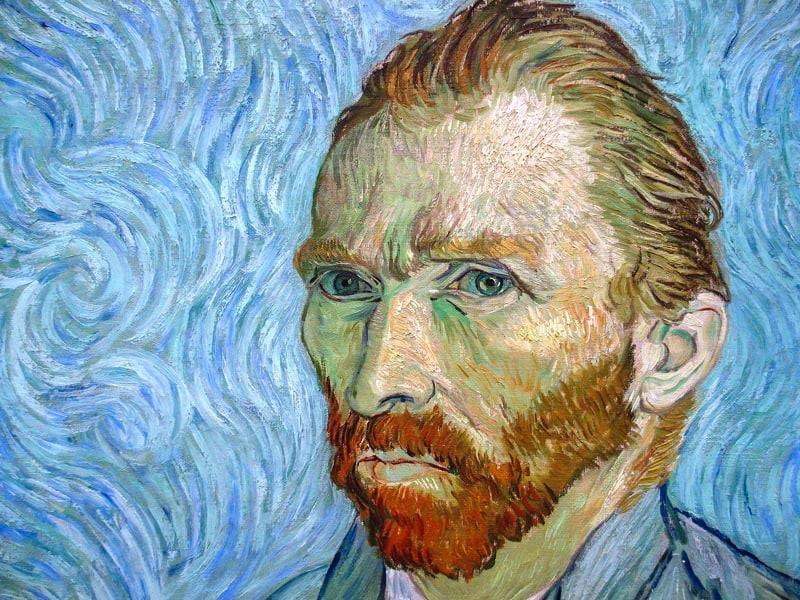 For many years, the artist could not sell any of his paintings, which leads to chronic depression, the development of epilepsy and a serious mental disorder.
The only person who helped and sympathized with the misunderstood genius was his older brother Theo Van Gogh. But Theo didn't even have time to make out this legacy. The brothers' paintings and correspondence are transferred to the brother's widow. The woman enthusiastically read the letters, appreciating their style and fascination, she published a collection that received recognition and a certain popularity.
The name of Vincent Van Gogh is starting to gain prominence.

Until 1973, before the opening of the museum, the paintings were kept by his nephew, who also came up with the idea of creating a museum and bringing it to life.
The building was designed by Gerriet Thomas Rietveld, a Dutch designer and architect. 25 years later, an additional exposition wing was attached to it, the project of which was developed by the founder of the architectural direction of metabolists - Japanese Kise Kurokawa. 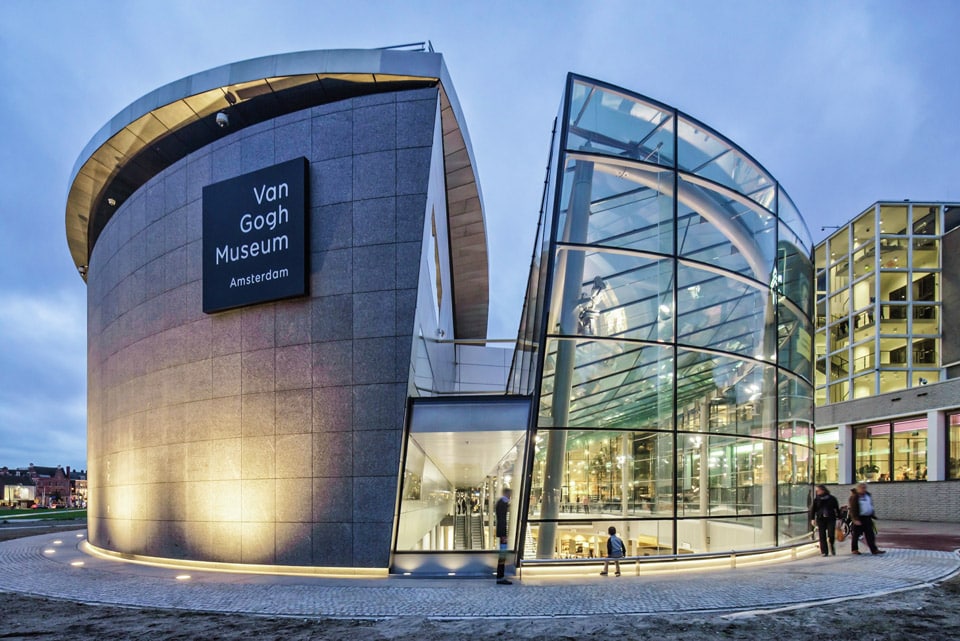 None of the works were returned. Surprisingly, according to Dutch law, if within 30 years after the disappearance of the paintings, the kidnappers can claim their rights to the masterpieces.

Since the number of people wishing to visit the Van Gogh Museum exceeds the possibilities, you need to take care of buying tickets at least 3 days in advance. An adult ticket costs 19 euros, with an audio guide - 24 euros, for holdersI amsterdam card- is free. Children under 17 can visit the museum for free, accompanied by their parents.

A ticket to the museum is purchased for a specific date and time in advance at the official ticket offices www.tiqets.com.Please note that when you go to the checkout page, there is a logo of our site at the top of the page - this is a guarantee of a safe purchase. 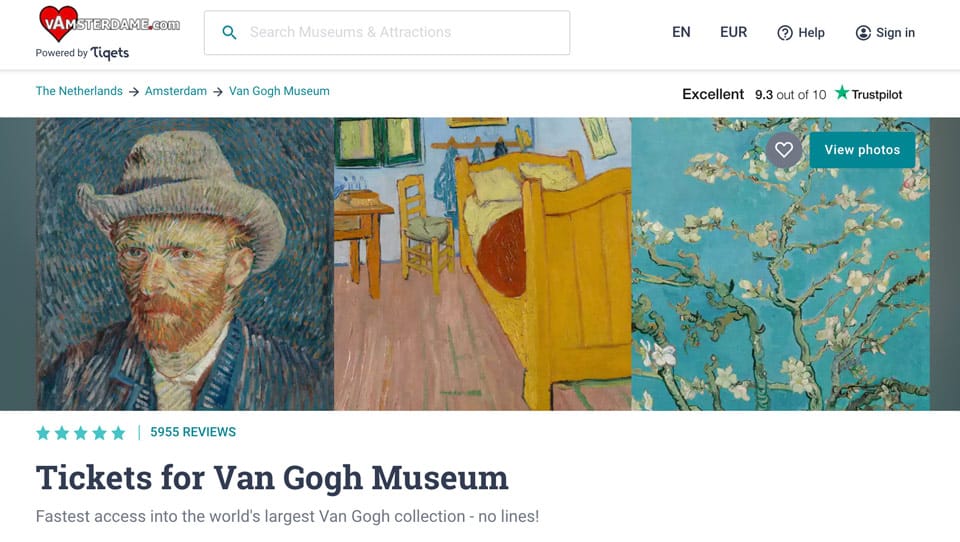 We select the required date and time, for example, August 1 at 12:00 and click “Check availability”.

In the next step, select the required number of tickets. For example 2 adults, one with an audio guide, and one free for children. 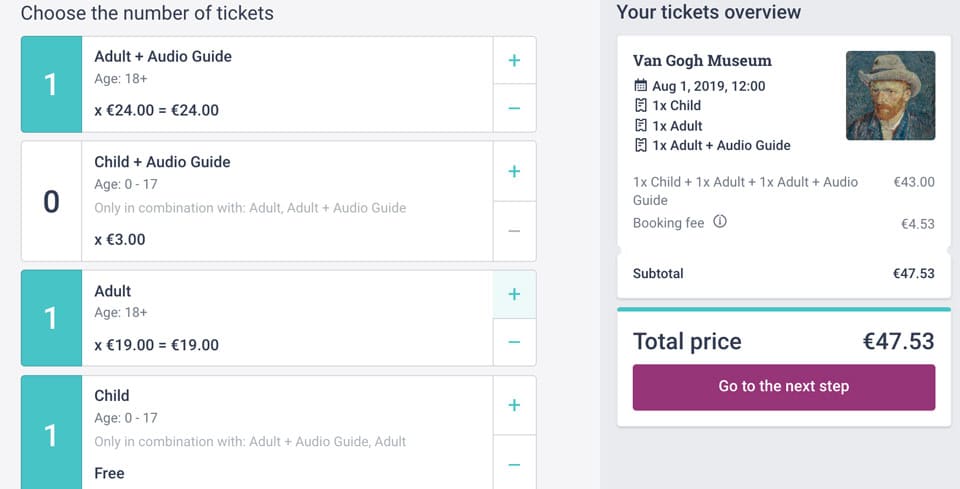 The audio guide is available in Russian, English, German, Italian and other languages. It turns out directly in the museum. Go to the next step (Go to next step) where you need to enter your first name, last name, email and phone number. 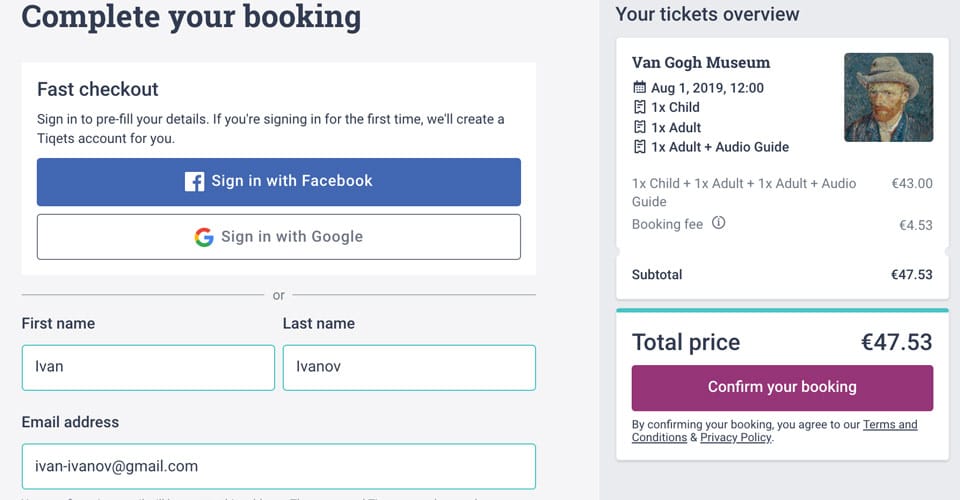 Click Confirm your booking and pay with any credit card online. An electronic ticket instantly comes to your mail, it is not necessary to print it, it is enough to show it at the entrance from any electronic device. Please note that a small Booking fee is included in the ticket price, which includes 24/7 customer support. You have 30 minutes after your booked entry time, but try to be on time.

How to get there? From the central station (Amsterdam Centraal) to the museum, take tram no. 2 or no. 5 to the Hobbemastraat stop.

Please note that the box office often hostsspecial promotions, you can buy a combined ticket for the museum and the boat cruise, which usually costs 16 euros with a substantial discount. 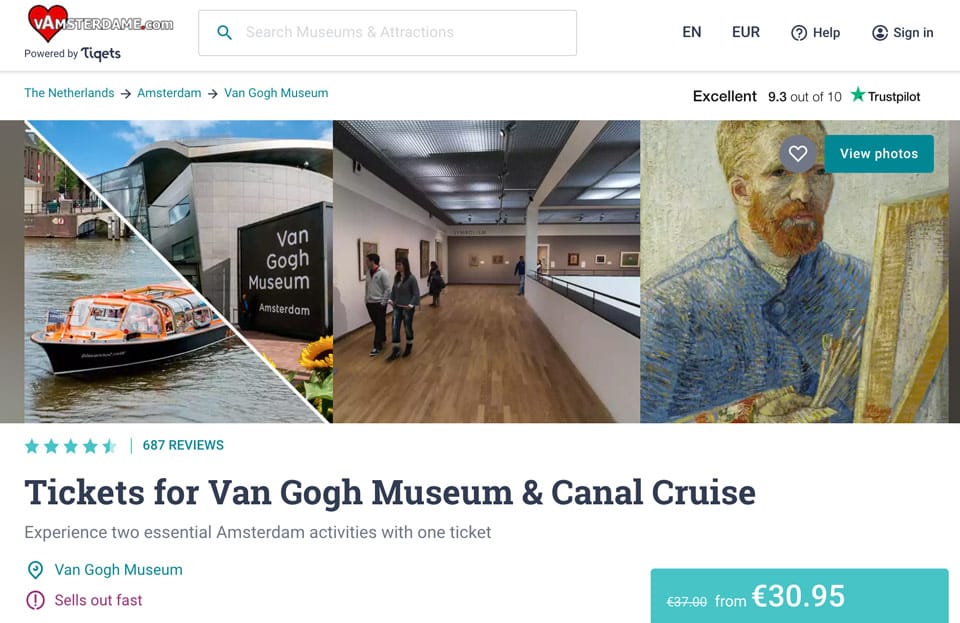 • The museum accepts printed and electronic tickets. If you are unable to print your ticket, no problem! Just bring your smartphone or tablet with you to the museum (don't forget to check if it's charged).Your ticket is only valid on the day and hour of your choice. You can enter the museum no later than 30 minutes after your booked visit time.
•Taking pictures in the museum is strictly prohibited!Except for a few special areas where you can take a couple of pictures.
• Tickets can also be obtained on the official website of the museumvangoghmuseum.nlwhich is available in Dutch, English andin Russian.