Sightseeing Horn - what to see in 1 day

Hoorn is considered by many residents of the Netherlands to be one of the most beautiful cities in North Holland (Noord-Holland). There are many churches, museums, interesting buildings and other attractions here. At the same time, it is small and very comfortable. Horn is also interesting because near him in the 16th century. a naval battle took place, during which Spain suffered a crushing defeat, and the Netherlands gained independence.

Horn is located in the West-Friesland region in the province of North Holland.From Amsterdam, the capital of the country, the city is separated by 32 km in a straight line and 38 km along the highway.More than 72 thousand people live in Horn, and its area is 52.49 km2, of which 32.62 km2 is water.

There are many canals in the Horn, and from the south the city is washed by the waters of Lake Markermeer, which is part of the non-existent Zuiderzee Bay, which used to flow into the North Sea (Noordzee). The bay was 100 km long and 50 km wide, but it was shallow: its maximum depth did not exceed 5 m.Therefore, in the last century, most of the reservoir was fenced off from the North Sea by the Afsluitdijk dam, which was 30 km long. As a result, the water in the bay became fresh, and the Zuidersee became the IJsselmeer lake. 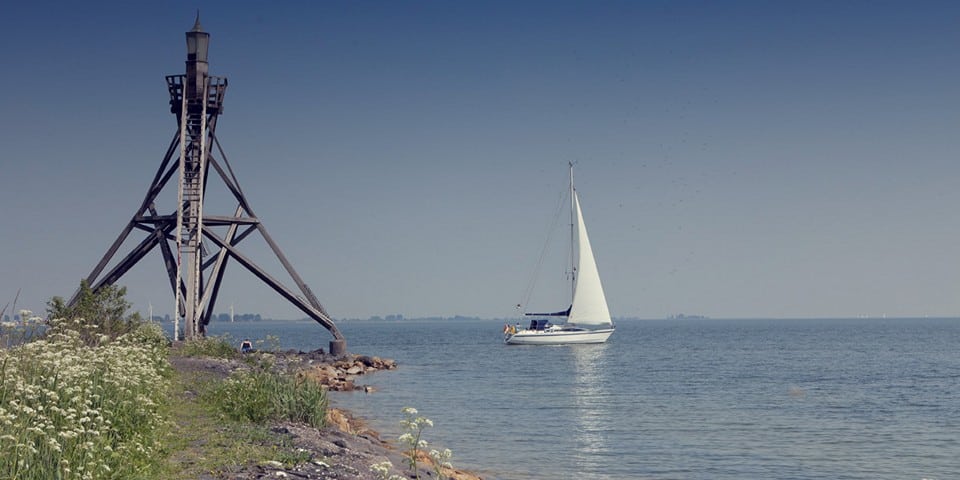 In the 80s. the southwestern part of the IJsselmeer was fenced off by another dam, which led to the appearance of the Markermeer. At first, they wanted to drain the new lake, but later the authorities decided that this was not rational, and began to use the Markermeer as a freshwater reservoir. It was especially useful in the drought of 2003, when the water reserves from the lake were used to maintain the water level in the Amsterdam canals.

Horn's story can be divided into three periods. The first is the era of the founding of the city, the second is the struggle for the independence of Holland and the subsequent period of prosperity and decline. The third stage dates back to the time when Horn became a major railway center in the country, which led to its revival.

According to legend, Horn was founded in 716 by Hornus, the stepson of the Frisian king Radboud. At the same time, it is worth noting that officially nothing is known about the descendants of this king, as well as his wife, except for the existence of the daughter of Tiandswid. The second legend says that the name of the city comes from a sign with a horn that hung in one of the taverns at the end of the 14th century. The third version says that Horn got its name from the coast, which resembles a horn in shape.

Be that as it may, the first archaeological finds testifying to the presence of people on the territory of Horn date back to 1200.

Apparently, farms were located here at that time and peat was mined. Earlier artifacts, if any, hid under them the waters of a lake that formed on the local lands after a severe flood that led to the expansion of the Zuidersee.

The first mentions of Horn as a city date back to the end of the 13th century. In the city book of Wismar, it is said that Nicholas Horn acts as a guarantor for some merchants from Muiden. As you know, at that time there was intensive trade between the cities of West Friesland and the Baltic Sea (Oostzee). Obviously, Horn's merchants at this time already had a good enough reputation to give sureties. Also, references to the construction of a dam belong to this period, the need for which was caused by constant flooding, which forced some villages to move to the side.

In 1356 (57?) Horn received city status, which allowed the authorities to develop laws and collect taxes.As for trade, in the Middle Ages it fell sharply, because at that time other cities with a more favorable geographical position (the same Amsterdam) were developing rapidly. In 1481 a great fire broke out in Horn, which severely damaged the western part.

Middle Ages and our days

During the struggle for independence from Spain, the inhabitants of Horn supported the Prince of Orange (Prins van Oranje). In 1573, a battle took place in the waters of the Seiderze Bay between the Dutch and Spanish troops, which ended in the defeat of Spain. The reason for the battle in the gulf was that the supply of goods to cities loyal to the Spaniards went through the Zaydörze, and the Dutch constantly tried to disrupt this message. Spain decided to end this once and for all, but the wind came to the aid of the rebels, because of which the Spanish fleet was defeated. After this battle, Spain realized that it had lost control of North Holland.

In the XVI-XVII centuries. Horn prospered as the headquarters of the Dutch East India Trading Company (Verenigde Oostindische Compagnie). Also located here was the North Greenland Company (Noordsche-Groenlandse Compagnie), which was engaged in whaling, the Admiralty of West Friesland and the Northern Canal (Admiraliteit van het Noorderkwartier) and some large enterprises.

At this time, the famous navigator Willem Schouten was born in Horn, who named Cape Horn (Kaap Hoorn) after his hometown, which is the southernmost point of South America.

In the XVIII century. the state of industry began to deteriorate, and Horn became an ordinary provincial town. In the XIX century. the townspeople decided to stake on farming, and they paid off. At that time, two large markets were located here - with the sale of cheese and cattle. There was also a district court, military departments and an important railway junction. After the construction of the Afsluitdijk dam in 1932, the city lost the title of a seaport.

In 1966 Horn became a municipality and new districts were built here. Due to the fact that the city is located 40 km from Amsterdam, the number of its inhabitants is constantly growing: housing is cheaper here, and you can get to the capital by train in half an hour.

There are 383 state and 250 municipal monuments in Horn.Most of them are located in the historical center, which is officially recognized as a protected area. Any development here or radical changes in the design of the facade require approval from the authorities.

One of the interesting sights of Horn is the so-called "bricks" (gevelsteen). This term here means any object built into the facade of a building that has a decorative function (something like a bas-relief). Gevelsteen appeared at the end of the 16th century, and gained particular popularity in the 18th century, when they began to be used instead of numbering houses. All gevelsteen are special and unique, as they were made taking into account the profession, surname or name of the customer. In total, there are about 200 bricks in Horn, each of which is under state protection. 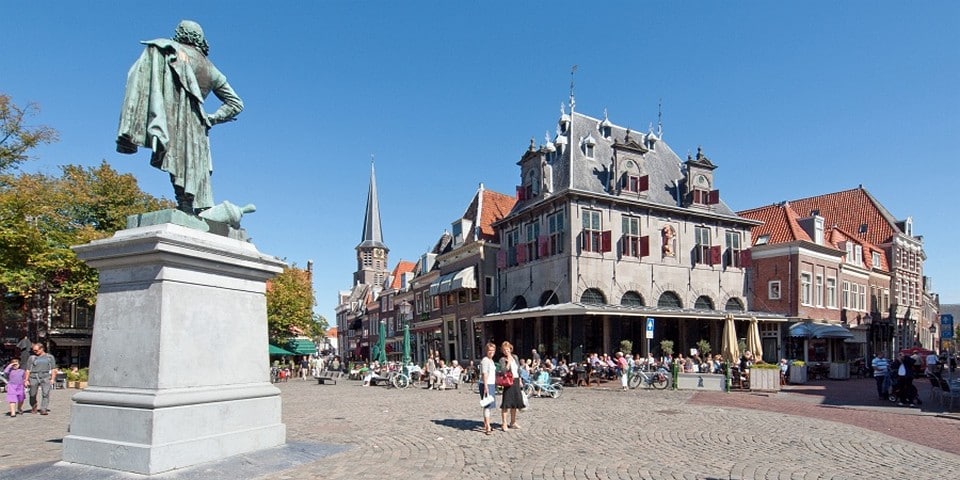 The main square of Horn is Roode Steen, which means Red Stone. It is located not in the center, but in the south of the city, a six-minute walk from the coast.In the middle of the square there is a monument to Jan Pieterszoon Coen.The area itself is small, surrounded by low buildings. Historic buildings include the Westfries Museum and the De Waag, a 1609 building where food, and above all cheese, was weighed.

In 2007, in honor of Horn's 650th birthday, a cheese market was restored on the square, which played an important role in the life of the city in the 19th century. Since then, it has been open every Thursday from 12.30 pm to 4.30 pm from mid-June to the first Thursday in September.

From the square, the 5 oldest streets of the Horn diverge in different directions. To the east is the Grote Oost (East Street), which is known to have been paved with bricks already in 1402. To the southwest, towards the coast, there are two streets - West and Proostensteeg. In the northwest direction is Grote Noord, in the northeast - Kerkstraat. 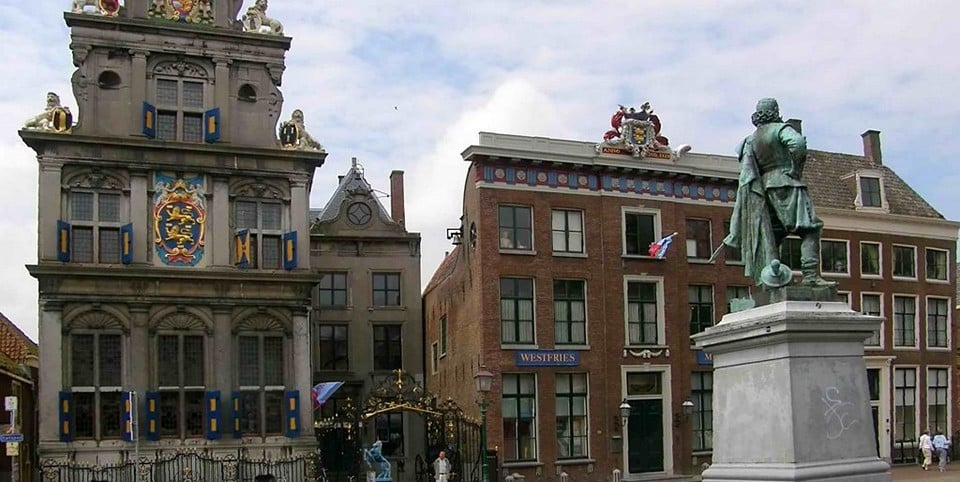 The Westfries Museum was opened in 1880 in a 17th century building. The structure originally belonged to the city and was known as State College. First, the council sat here, then the court was located. The museum first occupied the back of the building, then completely occupied the premises. In 1994, the Westfries Museum was expanded to include the adjacent building at 16 Roode Steen.

The collection, which occupies 17 rooms, is focused on the cultural history of West Friesland in the 16th-19th centuries.The museum contains an extensive collection of paintings, silverware, china, firearms, including the outfit of the city guards.

On the night of January 9, 2005, when the museum was celebrating its 125th anniversary, the attackers, having broken open the door, stole 21 paintings of the 17th-18th centuries from the collection, including works by Jan van Goyen ... Also, 70 silver items were stolen. The experts estimated the damage at several million dollars.

In January 2014, information appeared that near Donetsk, in the estate of one of the close associates of the former President of Ukraine Yanukovych, there were several stolen paintings. In January 2016, Ukraine returned five paintings to the museum. 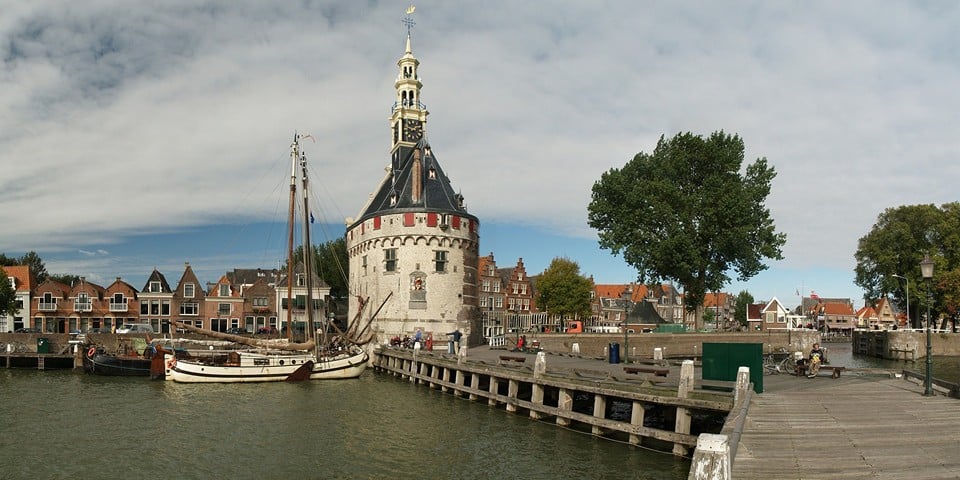 The Main Tower (Hoofdtoren) is one of the oldest buildings in the Horn. It is located in the port of the city, a six-minute walk from Roode Steen.Hoofdtoren was built in 1532 from brick and limestone, and in 1651 a small tower with bells appeared on top.In 1614 the tower lost its defensive significance, and it was rented by the North Greenland Company, which was engaged in the 17th century. whaling.

Now there is a restaurant, which can be visited by anyone, and during dinner, admire the view of the harbor and lake. 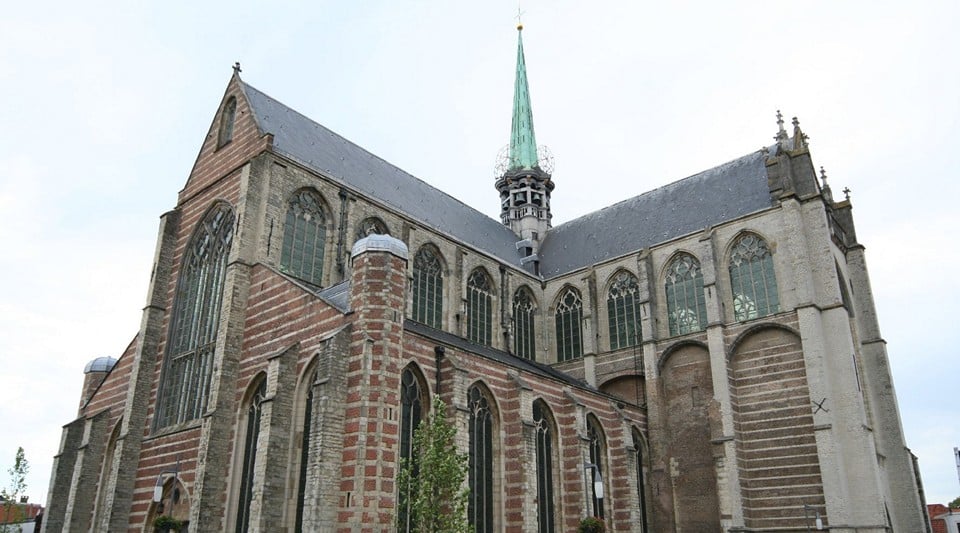 One of the most notable buildings in Horn is the Grote Kerk, located at 34-36 Church Square (Kerkplein).

This is a spacious building in the Gothic style, the height of the towers of which is 60 m. The temple appeared in 1881, replacing the church of a larger size, which three years earlier burned down from a lightning strike. In 1968 the Grote Kerk was closed for worship.Now a restaurant and a market are located within the walls of the former temple, it is planned to equip apartments.

The Grote Kerk tower is owned by the city. Every year, the Day of Remembrance of the people who died during the hostilities is held near the former church.

In addition to the Grote Kerk, there are many more church buildings in Horn, among which the following attractions can be distinguished: 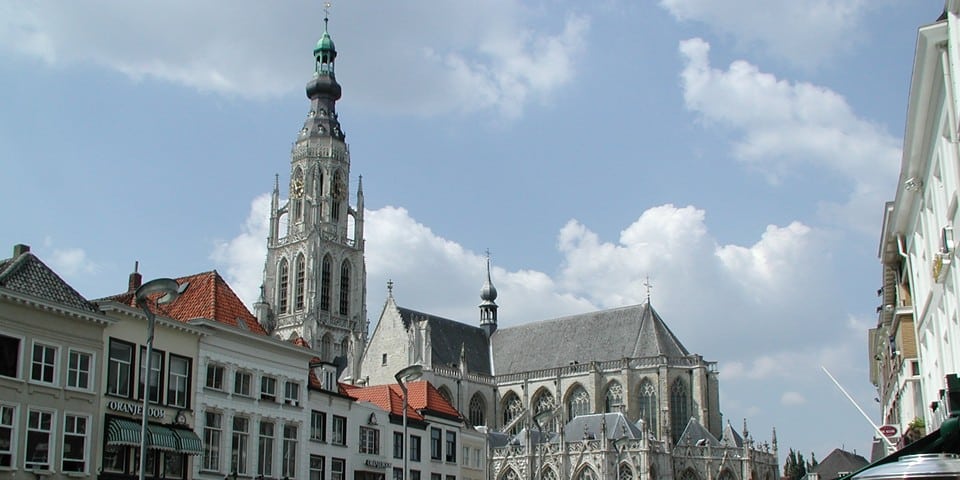 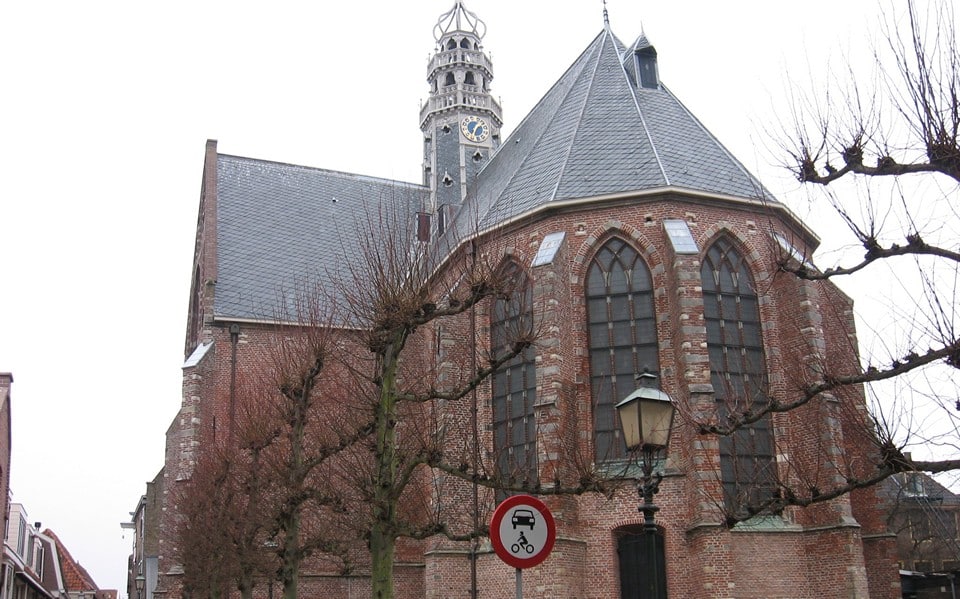 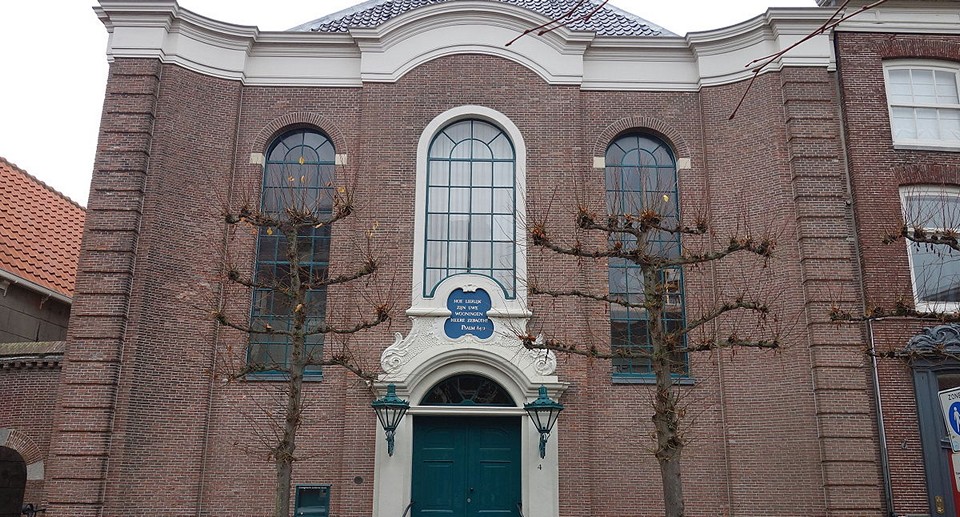 From Amsterdam to Horn, the distance along the highway takes 38, so it takes half an hour to get here by train or car.

The most convenient way to travel from Amsterdam to Horn is by train.The first flight departs at 6 am, the last one at 1–2 am. You can go from several stations at once:

More details about the schedule, route and price can be found here:www.ns.nl.

On the highway from Amsterdam to Horn can be reached in 40 minutes, having overcome the path of 40 km. To do this, take the s116 towards Nieuwe Leeuwarderweg / N247 (Amsterdam-Noord). Then continue on the N235, merge onto the A7 and head towards Purmerend. Then take exit 8-Hoorn from the A7 towards Hoorn. Continue along Provincialeweg. Follow Keern, Veemarkt and Gedempte Turfhaven towards Onder de Boompjes (Hoorn).

Picturesque harbors, museums, medieval houses, towers and cozy streets. The sights of Horn are definitely worth seeing for anyone who wants to understand what the city is like, at the walls of which the Netherlands gained independence.