What to see in Zaandam in 1 day

Anyone who wants to know where Peter I worked as a carpenter should go to Zaandam. The original house has been preserved here, where the king lived for about a week, during which he procured permission for himself to work at the shipyards of the Dutch East India Company (Verenigde Oostindische Compagnie).

Peter I was the first not the only famous figure who honored the city with his visit.The sights of Zaandam - windmills, colorful houses, boats on the water, also attracted the French painter Claude Monet. He spent four months here, creating 25 paintings and 9 sketches.

Zaandam (also spelled Zaandam) is a city and administrative center of the municipality of Zaanstad, located in the west of the Netherlands in the province of North Holland (Noord-Holland).Zaandam is a suburb of Amsterdam, which is located from Zaandam at a distance of 9 km in a straight line, 20 km along the road to the northwest.

The area of Zaandam is 23 km2, and the population exceeds 70 thousand people. Thus, 3156 people live here on one square kilometer. This density is due to the fact that Zaandam is an industrial city, where various enterprises of a very different orientation are concentrated.

Zaandam is located on both sides of the Zaan River, which gave the city its name. From the south, Zaandam is bounded by the Noordzeekanaal, which is the main waterway that links Amsterdam to the North Sea (Noordzee).

Zijkanaal G departs from the Nordze Canal in the northwest direction, which then divides into two streams - Voorzaan and Oude Haven. These two channels wash over a small island, then converge again and flow into the Zaan, which flows further north. Part of Zaandam ends at some stretch of the river's path, and then the river becomes the western border of the city. 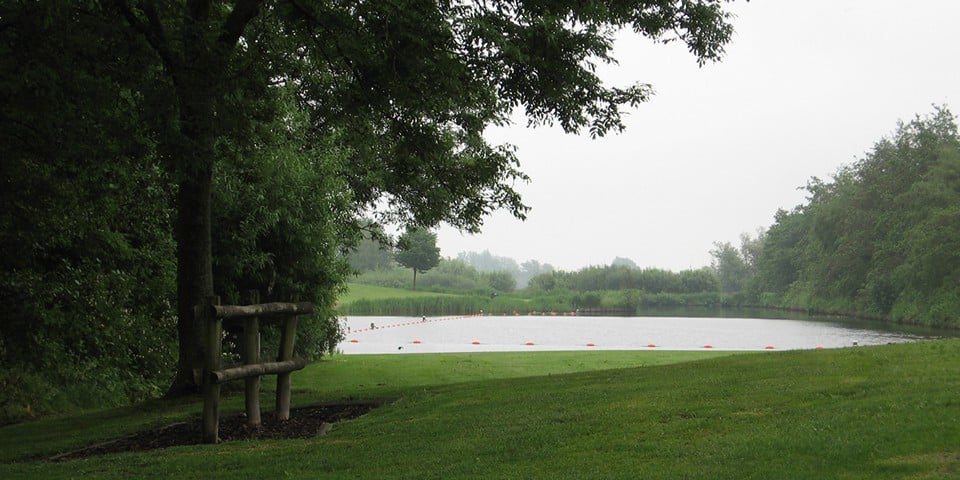 There are two large reservoirs in Zaandam. One of them is located in the northeastern part of the city, in the Jagersveld Park, where you can enjoy great outdoors. The second is located in the southeast - Noorder IJpolder.

Modern Zaandam was formed in October 1811 as a result of the merger of the villages of Oostzaan and Westzaan (East and West Zaan).In January 1812, according to the decree of Napoleon Bonaparte, Zaandam was granted the status of a city.

East and West Zaam (Oostzaan and Westzaan) are the two oldest villages in the county. The first mention of the East Zaam dates back to 1306, but people settled here at least two centuries earlier.

The second part of the name - "dam", the city received thanks to the dam built on the western bank of the Zaan River at the end of the XIII - at the beginning of the XIV century. Peter I settled for a few days near this dam in 1697. Dam was located a little away from both the East and West Zaam, but after the merger of the villages it became part of the city.

In the XVII-XVIII centuries. Zaandam's history was associated with whaling. During this period, there were fifty shipyards here, where several dozen ships were built annually. In the XIX century. in Zaandam, many industrial enterprises were opened, the work of which was based on the use of wind energy with the help of mills. Here they were engaged in the production of paper, oil, paints and varnishes, the manufacture of tobacco, spices. Along the river and canals there were hundreds of mills that sawed wood from Scandinavia, Germany and the Baltics for shipbuilding, houses, factories and warehouses.

In the middle of the XIX century. wind power was supplanted by the introduction of steam engines into production. Nevertheless,Zaandam remained a large shipbuilding center.Also saved are logging companies, a cocoa and chocolate factory. In Zaandam, they produce firearms and ammunition for the army. 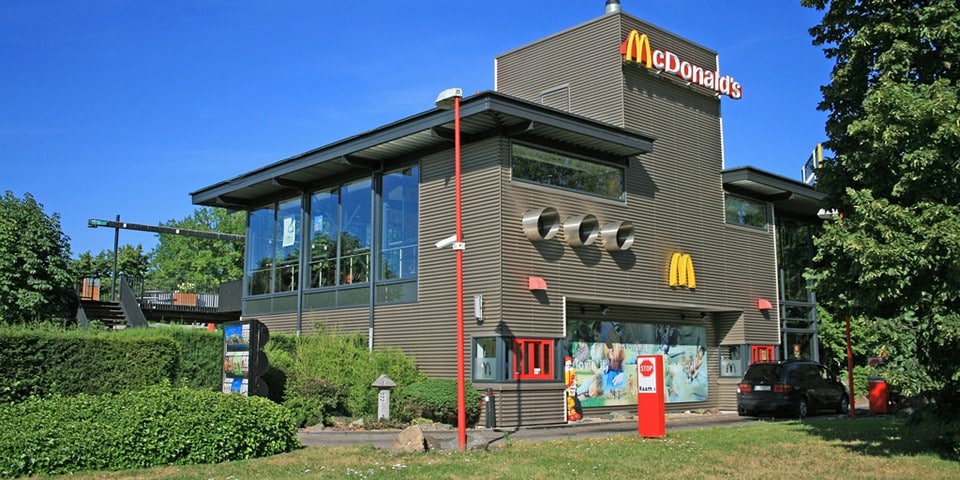 In 1971, the first McDonald's in Europe was opened here.

In 1974 Zaandam became part of the municipality of Zaanstad, and since 2011 has been its capital. Since 2008, the authorities have begun the reconstruction of the central part of the city, aimed at giving the old part of Zaandam a modern look. A novelty was a project called Inverdan, when traditional Zaan architecture was painted on the façades of modern buildings.

The house of Peter I is not the only attraction for which Zaandam became famous. There are 128 national and 83 municipal monuments. Among them are residential wooden houses, temples, mills, monuments. Particular attention should be paid to new buildings - many of them are unusual, and such structures can hardly be found in another city.

Tsaar Peterhuisje - this is how the Dutch call the small wooden house where Peter I lived when he arrived in the Netherlands with the Great Embassy (Grote Ambassade) in 1697. Among the tsar's tasks is to see how Europeans live, to acquire weapons, and to invite foreign specialists to Russia. 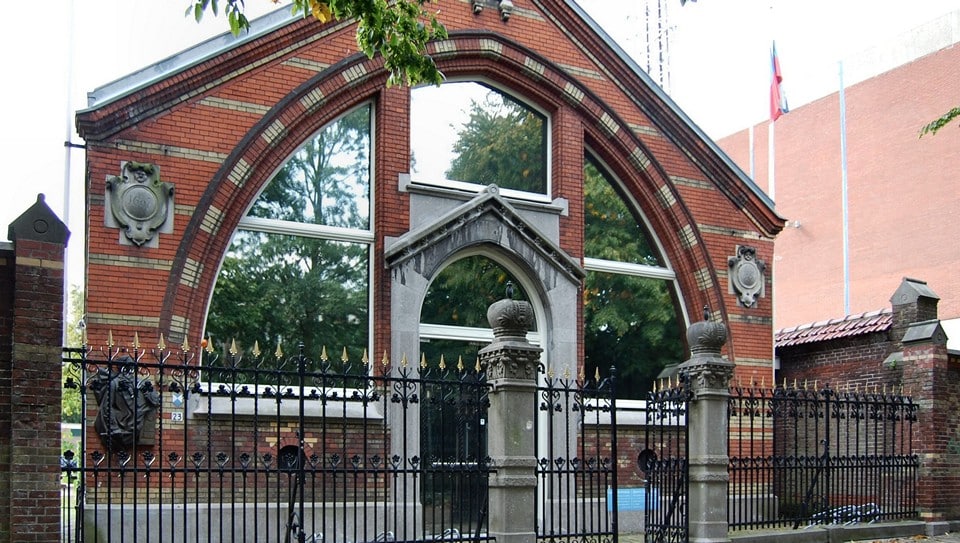 The king settled not far from the dam in a wooden house built from the wood of an old ship in 1632. The place of residence was not chosen by chance. Here lived the blacksmith Gerrit Kist, who used to work in Arkhangelsk and was familiar with the king. Peter arrived in Zaandam on August 18, and the very next day he began to work at Linst Rogge's shipyard as an ordinary carpenter: the tsar stayed here incognito under the name of Peter Mikhailov.

On August 25, the tsar moved to Amsterdam, where from September 9 he took an active part in the construction of the ship "Peter and Paul". 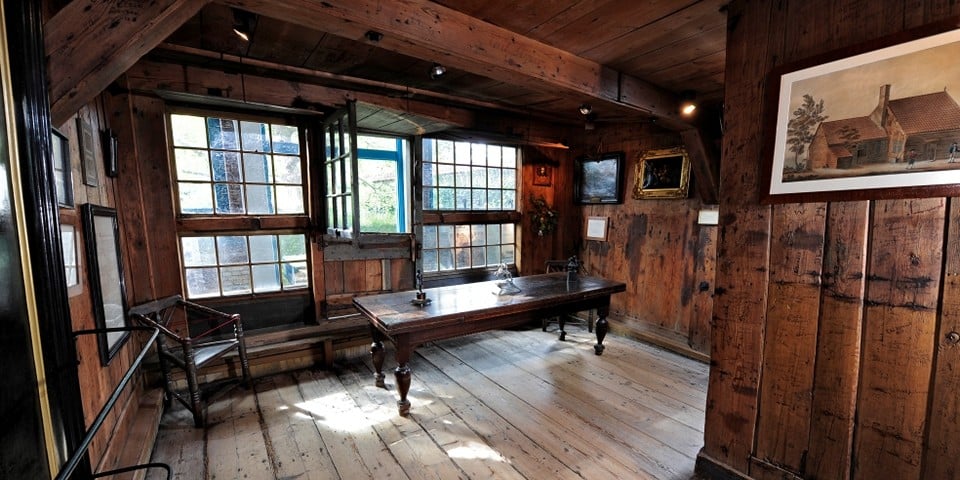 In 1816, the daughter of Tsar Paul I, Anna Romanova, married the future king of the Netherlands, William II of Orange (Willem II). His father Willem I gave her Tsaar Peterhuisje in 1818 in honor of the birth of her second grandson.Anna Romanovna and ordered in 1823 to surround the landmark with a stone caseto protect it from the elements. That is why tourists initially get the impression that the house is made of stone. But bypassing the stone barrier, you can see that the building has been preserved in its original form. 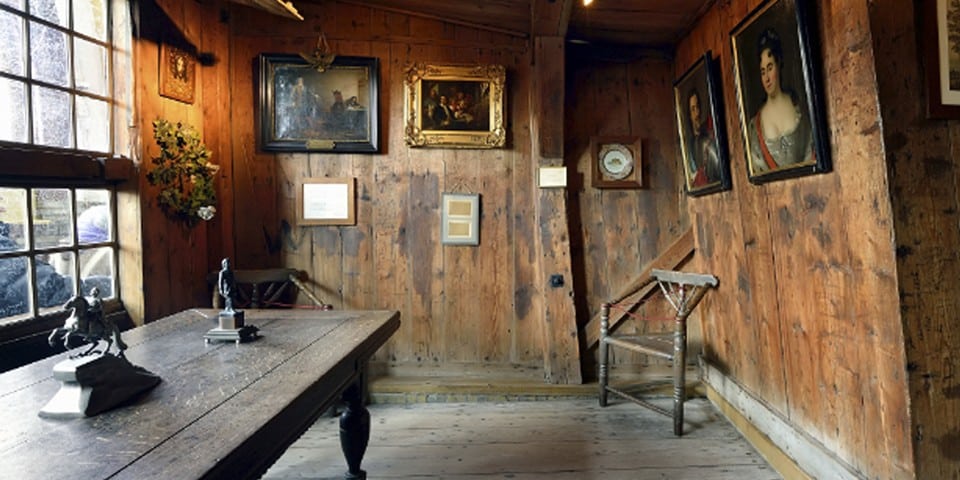 In 1866 Tsaar Peterhuisje came into the possession of the Russian Tsar Alexander III. The house belonged to the Romanov family until the 1917 revolution, whose representatives also monitored the safety of the sights.

In 1948, the two heirs of the Romanov family gave up their rights to Tsaar Peterhuisje, and it became the property of the Netherlands, after which a museum was created here, which is a branch of the Zaans Museum. Here you can see many interesting memorable and rare things. At various times, many famous people visited Peter's house and left an autograph. Among them are Mikhail Kutuzov and Napoleon Bonaparte.

Zaanse Schans is an old village, the buildings of which are an example of Dutch wooden architecture of the 17th - 18th centuries. Houses were brought here from different parts of the Netherlands in the second half of the last century in order to preserve the cultural heritage. In many buildings there are museums and shops, but many houses are inhabited: they are rented out to citizens of the Netherlands. There is also an opportunity to rent a hotel room. 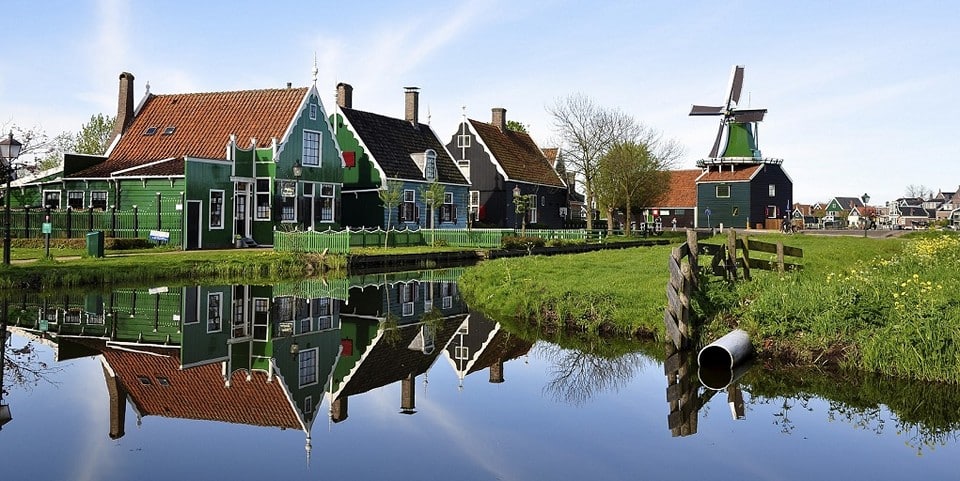 Among the attractions of Zaanse Schans - the Dutch clock museum, a workshop for the manufacture of klomps (Dutch wooden shoes). There are also mills-factories, many of which are still in operation. Here you can see old cheese dairies, oil mills, sawmills, a mill for the production of spices, herbs, cereals. The Gecroonde Duyvekater bakery, which sells bread made according to old recipes, cannot be overlooked. At the same time, you should definitely try the duivekater loaf, the taste of which is legendary.

The Zaanse Schans is home to De Kat, the only working windmill in the world dedicated to making paint. 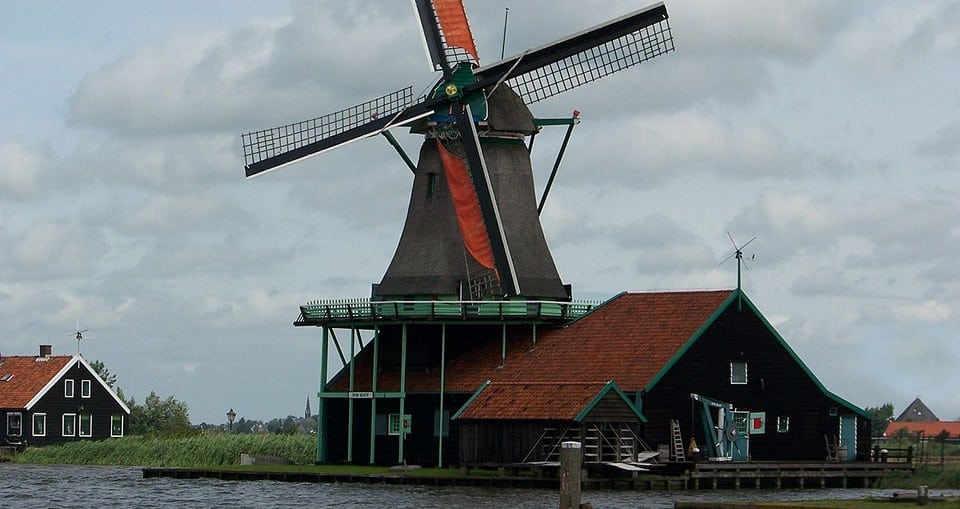 Some of the pigments created here are bought by the professional company MILLERS for their products. The mill was created in 1782 after an old building, built one and a half hundred years earlier, burned down.

The Zaans Museum is almost entirely located in the Zaans Schans, with the exception of the house of Peter I and some other exhibitions. The museum was opened in 1998, and was originally dedicated to the history and culture of Zaandam. In 2015, Claude Monet's painting "Forzaan and Westerhem" (De Voorzaan en de Westerhem) appeared here, depicting the Zaan landscape. 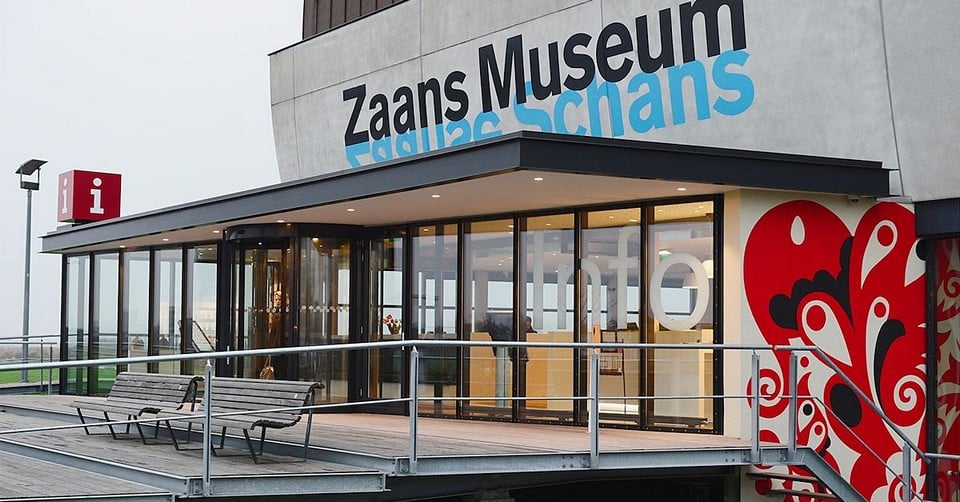 The Zaans Museum stores clothes, household items, furniture of local residents of past eras. There is also a fisherman's house Het Jisperhuisje, where you can see how local fishermen lived before the industrial boom in the region. Attention should be paid to the house where the papermaking family lived (located a little to the side, at Lagedijk, 80).

On the territory of the Zaans Museum, there is an exhibition dedicated to the industry of Zaandam, in particular, shipbuilding, the manufacture of canvas. The Verkade Experience collection from the collections of the Verkada family, which tells about the history of making chocolate, cookies, tea candles, is on display for the public. There is a separate exposition telling about what happened in the region during the Second World War.

The top floor of the museum offers a magnificent view of the Zaanse Schans, its houses and the mill. 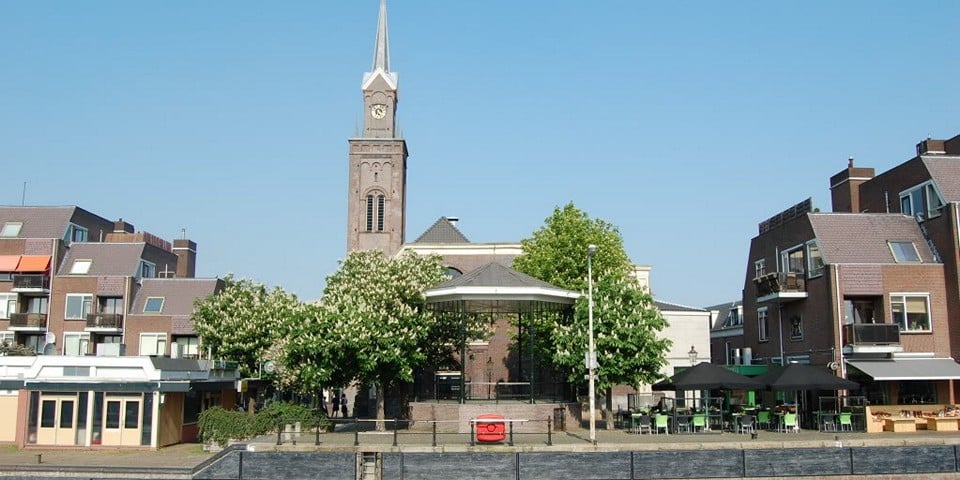 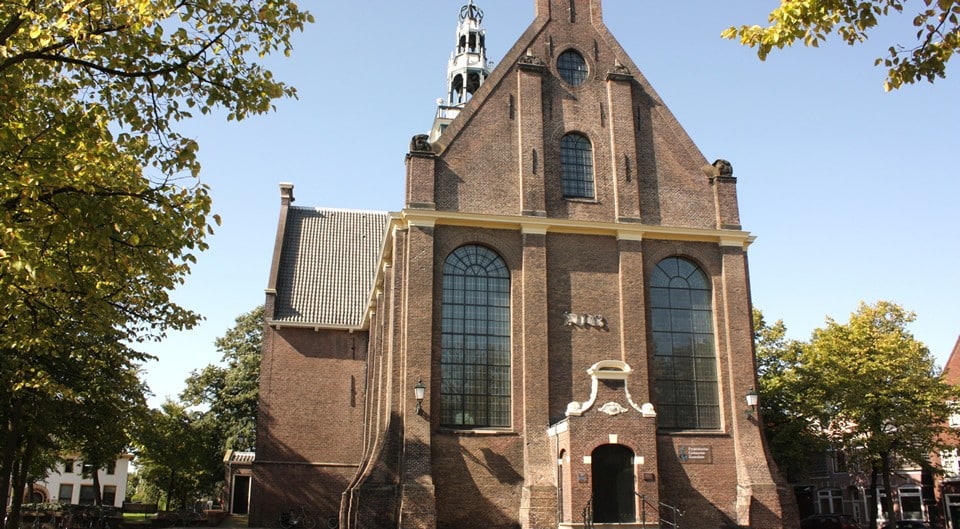 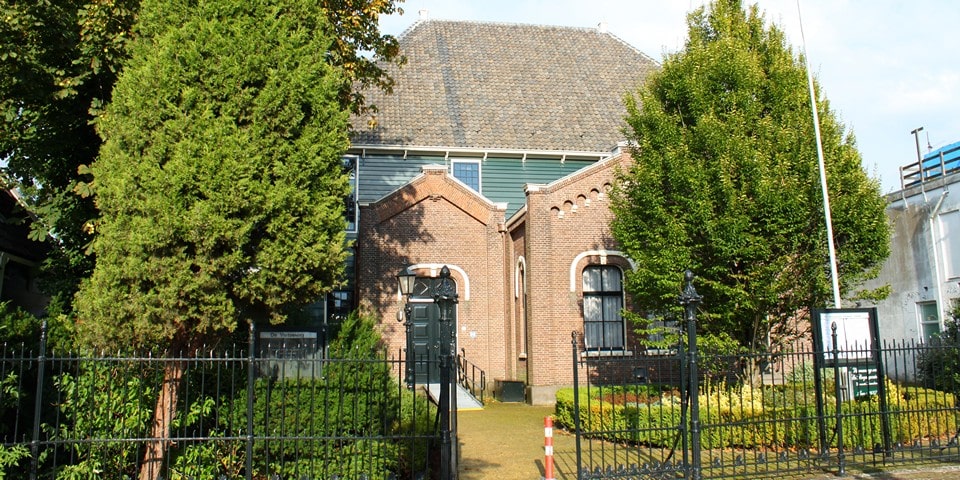 In addition to the above, there are a dozen more churches in the city that belong to different denominations, seven of which were built in the 19th century.

In 2010, the world's attention was attracted by the opening of the four-star Inntel Hotel Zaandam, which was built in the ultra-modern style of Dutch architecture. Outwardly, it resembles a building assembled from 70 different houses in four colors, which is why it topped the list of the most unusual hotels in the world according to CNN.

Interestingly, the blue "house" located on the edge of the hotel is a copy of the house where Claude Monet lived when he lived in Zaandam. The building was designed by the famous Dutch architect Wilfried van Winden.

Trains to Zaandam leave from Amsterdam Centraal, Schiphol Airport, Amsterdam Amstel stations. From the Central station (Amsterdam Centraal) trains run every 5 minutes, the journey takes 12 minutes. For travel in the second class you have to pay 2.7 €, in the first class - 4.6 €.

From Schiphol Airport to Zaandam can be reached in 20 minutes, trains leave every 10-15 minutes. The route goes through the Amsterdam Sloterdijk station. A ticket in the first class will cost 7.7 €, in the second - 4.5 €.

It takes 25 minutes from Amsterdam Amstel to Zaandam, trains run every 5 minutes. The first class costs 6.1 €, the second 3.5 €.

The last train from Amsterdam to Zaandam from any station leaves at midnight, the first run leaves at half past five in the morning. More detailed information can be found on the websitewww.ns.nl.

From Amsterdam to Zaandam, the most convenient way is to take the s116 highway. In this case, it will be necessary to cover a distance of 20.2 km, and the road will take half an hour. First you need to take Prins Hendrikkade and s116 to the A10 (Amsterdam-Noord) and head towards the A8. Drive along it to the A7 highway, from which Zaandam begins. To get to the city center, take the A7, then the s155 towards Jan Windhouwerstraat.

Zaandam is interesting for tourists primarily because here you can see how the locals learned to use the wind, sun, water, and produce a variety of products with their help. This is why the sights of Zaandam are a must see for anyone who wants to understand why the Netherlands is one of the most prosperous countries in Europe.