Attractions Edam - what to see in 1 day

If you want to know what the Netherlands looked like six hundred years ago, you should go to Edam, the city where the popular cheese of the same name appeared. During these centuries, Edam hardly changed, did not increase in size, but seemed to fall asleep. All the same low buildings, quiet medieval streets, churches, the 15th century town hall, and also ... a floating basement. And, of course,the main attraction of the city is the cheese market.

Edam is located in the province of North Holland (Noord-Holland) on the shores of Lake Markermeer. It is a small but densely populated city: a little more than 7 thousand people live here, while 1.5 thousand inhabitants live on one square kilometer.

Edam closely borders with another city, Volendam, together with which it forms the municipality of Edam-Volendam. From Amsterdam, the capital of the Netherlands, Edam is located 17 km in a straight line if you move in a northeast direction.

The eastern border of the city is Markermeer Bay, where the river IJe or E flows south through Edam, on which the city was founded. Actually, in Edam, it begins, departing from one of the reservoirs, goes through Volendam and flows into the lake. There are also many canals that run through Edam. The largest is the Oorgat, which flows through the city center and is the city's only body of water that flows into the Markermeer.

The western boundary of Edam is the Purmerringvaart Canal. Interestingly, it starts in the southwest of the city, departing from the Zeddegat canal, and makes a circle through the city of Purmerend, which is 6 km from Edam. Then it returns back, where part of it falls into Purmer Ee, which connects to the Markermer by a network of channels, the other part goes to Zeddegat and further in a circle. From the southern point of Purmer Ee, there is another Trekvaart canal in the direction of Edam, which then flows into the Purmerringvaart.

Edam emerged at the beginning of the 13th century. near the dam on the river E, which gave the city its name: E - river, dam - dam. Thanks to the favorable geographical position, trade and fishing were developed here.In 1357, Count Willem V (Willem V) granted the village city rightsto win over the people of Edam. During this time, military conflicts often took place here, called the "War of Hooks and Cod" (Hoekse en Kabeljauwse twisten). The "cod" league was supported by the bourgeoisie and part of the nobility, who sided with Count William V, while the conservative nobility joined the "hooks", supporting Wilhelm's mother, Margaret of Bavaria. As a result, the supporters of the Earl from the Cod League won.

The townspeople gladly took advantage of the new status. The Edamians were given the opportunity to choose sheriffs and judges, as well as the right to open a new seaport. At that time, Lake Markermeer was part of the Zuiderzee Bay, which had direct access to the North Sea (Noordzee), but after the construction of a dam in the early 20th century. turned into a fresh water body. 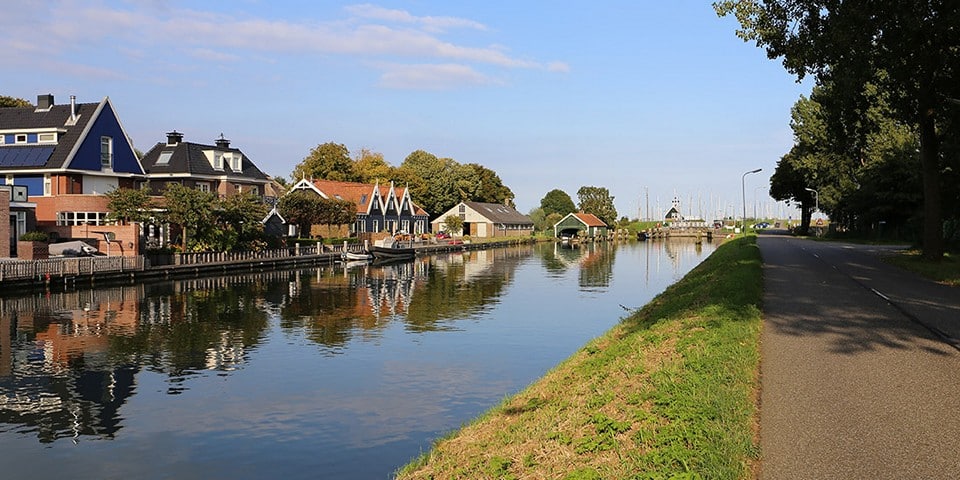 The opening of the port contributed to the development of trade and the economic growth of the city. Also in Edam, shipbuilding was actively developing, due to which by the beginning of the 16th century. the city was considered one of the largest shipbuilding centers in the region, and the port had 33 berths. In 1544, Emperor Charles V (Karel V) decided to close the open junction of Edam with the Gulf in order to protect the land from flooding. In 1570 the sluice gates, which were located in the center of the city, were destroyed, which led to the silting up of the harbor. Thus, Edam's shipbuilding industry came to an end, and the city's aspiration to be the main port of the Zuiderzee was destroyed.

Taking away the opportunity to develop in the maritime sphere, Charles V provided the Edamians with the opportunity to trade in cheeses, which by that time were famous throughout Holland. It happened a little earlier, in 1526, the townspeople took full advantage of this opportunity - and Edam's cheeses became famous all over the world.

There are 176 national monuments in Edam, and the city center is a conservation area. Among the attractions are the church of St. Nicholas, the old town hall, the city museum, the floating basement, the Weight Chamber and, of course, the cheese market.

The large church of st. Nicholas 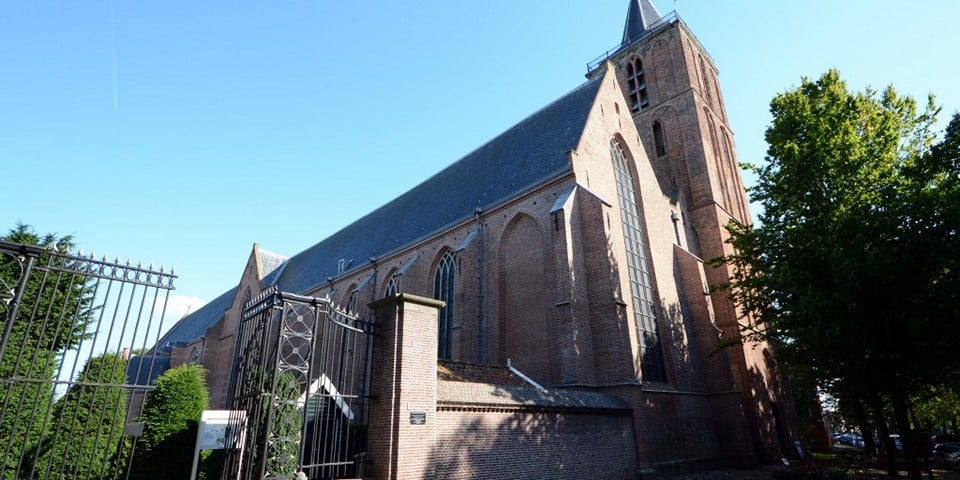 The Great Church (Grote Kerk) is one of the largest churches in the Netherlands. The length of the landmark is 88 m, width - 35 m, the thickness of the walls is from 1 to 2.5 m. The construction of the church began at the beginning of the 15th century, and the townspeople chose the place for the temple in an original way. They brought the bull to the center of Edam and let him go, deciding where the animal would lie, and there the church would stand. The bull chose a clearing on the outskirts of the city. Who knows how true the legend is, but the fact that the temple is located on the northwestern outskirts of Edam is a fact. 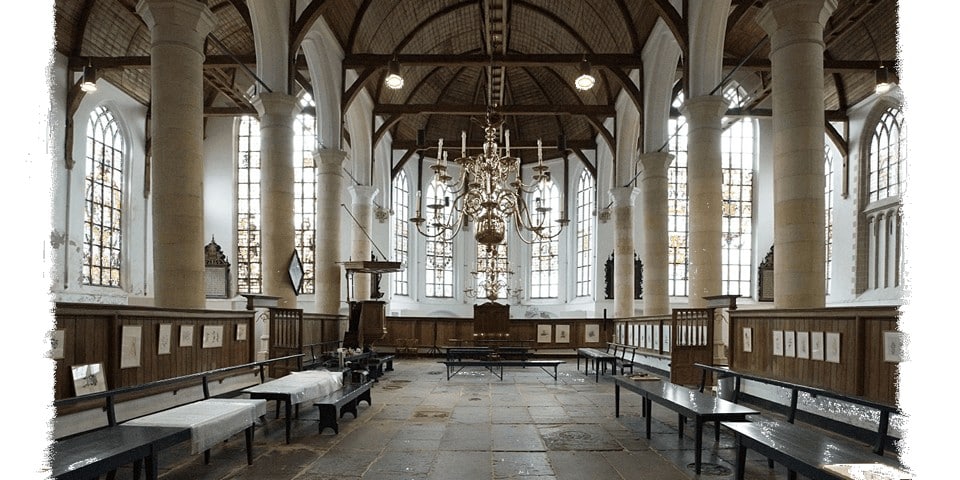 At first, the church was small, then after a while it was expanded.In 1602, the building was seriously damaged by fire, and the landmark had to be restored, which was done in a very short time. The result is 32 unique stained glass windows dating from 1602-1627.The total area of the stained-glass windows of the church of St. Nicholas is 550 m2,which allowed the architects to create a unique play of shadow, light, color inside the church. Also worth noting is the old local organ located within the walls of the church.

The bell tower of the temple offers a beautiful view of the city. The largest of the bells placed here weighs almost 3 tons, while the smallest, cast in 1602, weighs 1650 kg.

Earlier, services were held in the temple, there was a Latin school, and there was a library. There is an old cemetery near the landmark. Currently, the church has abandoned the building, however, funerals are held here, as well as palm, Easter and Christmas services. On other days, the former temple is used as an exhibition center for contemporary art. Also, there is a mini-cafe, a bookstore, concerts are constantly given.

The Old Town Hall (Raadhuis van Edam) was built in 1737. Since then, the plaster of the 18th century has been preserved in one of the halls on the ground floor, on the staircase and in some parts of the corridor. The walls of the Council Chamber are decorated with murals by Willem Rave. Their appearance dates back to 1738 and are characterized by biblical themes, telling about the coronation of Saul and the judgment of Solomon. Also in the Council Hall and in the mayor's office, the original furniture and two fireplaces have been preserved since that time. 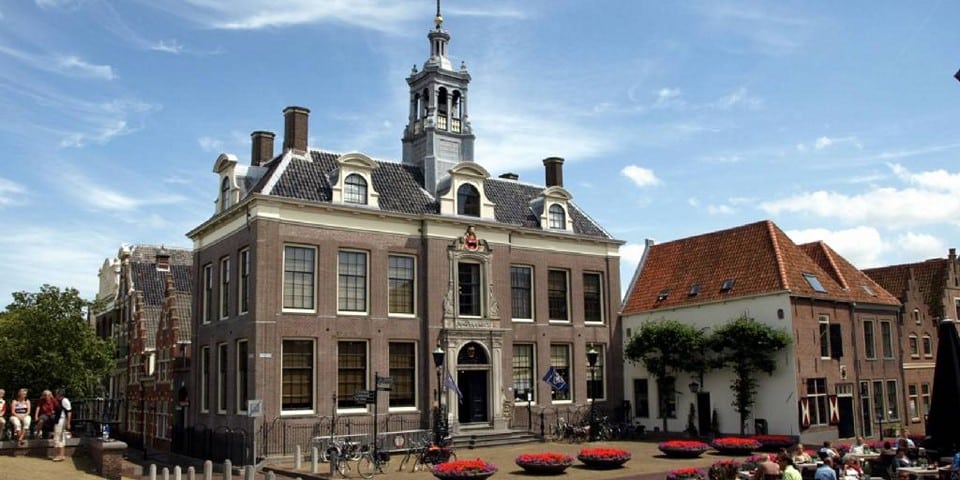 Now the old Town Hall is used for various purposes: a tourist office is located here, weddings and various celebrations are often held. On the first floor of the town hall there is a branch of the Edams Museum, where temporary exhibitions are exhibited.

The main part of the Edams Museum is located near the town hall, at Damplein, 8. It is an old merchant's house, built in 1540, and complemented by a beautiful facade in 1737. 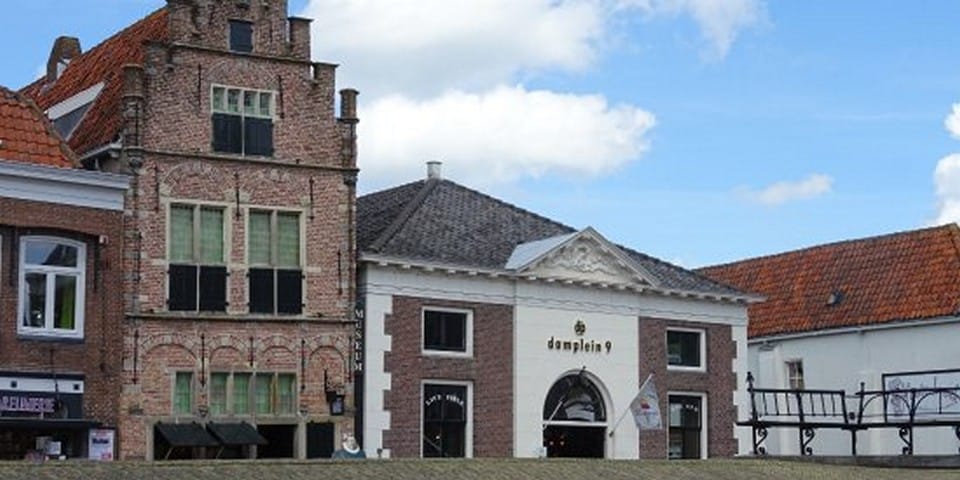 In the museum you can get acquainted with how people of the middle class lived in the XVI-XVII centuries. The exhibits tell about the history of Edam and its surroundings, shipbuilding, and the production of local cheese. Here you can also see samples of Frisian ceramics that were made in the city from 1947 to 69. 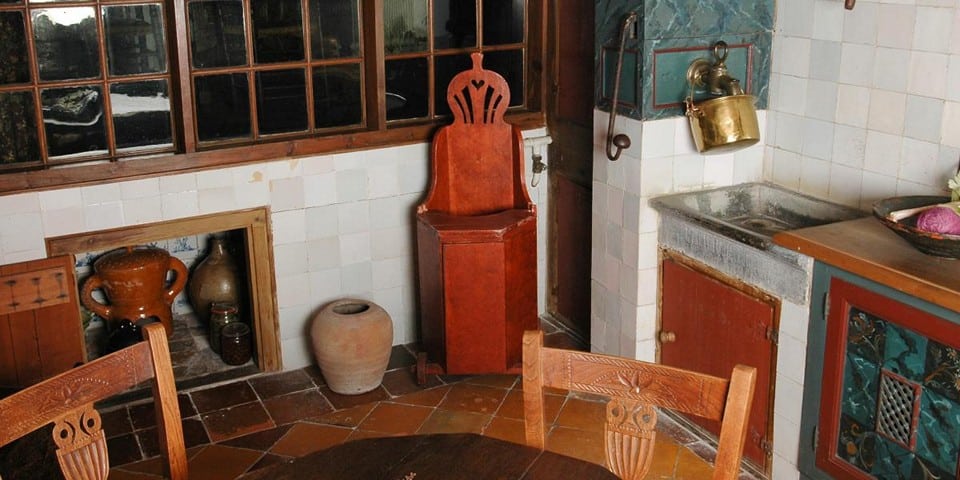 At the bottom of the museum there is a floating basement, which is a floor that literally floats in the water flowing under the house. You can even go here, stand, get used to the roll, which is why the visitor then begins to sway a little on solid ground. The reason for the appearance of the floating basement is simple - the first owner of the house was a navigator, and when he settled on land, he really missed the sea.

Although cheese bazaars in Edam existed since the 16th century, the Weighing Chamber (De Kaaswaag) appeared much later - in 1778. It was built to weigh cheeses, so the facade of the building overlooked the square where cheese products were traded. The building of De Kaaswaag still has beautifully decorated panels, where the coat of arms of Edam is depicted in the center - a bull with three stars on a red background, and on the sides there are paintings related to the weighing procedure. 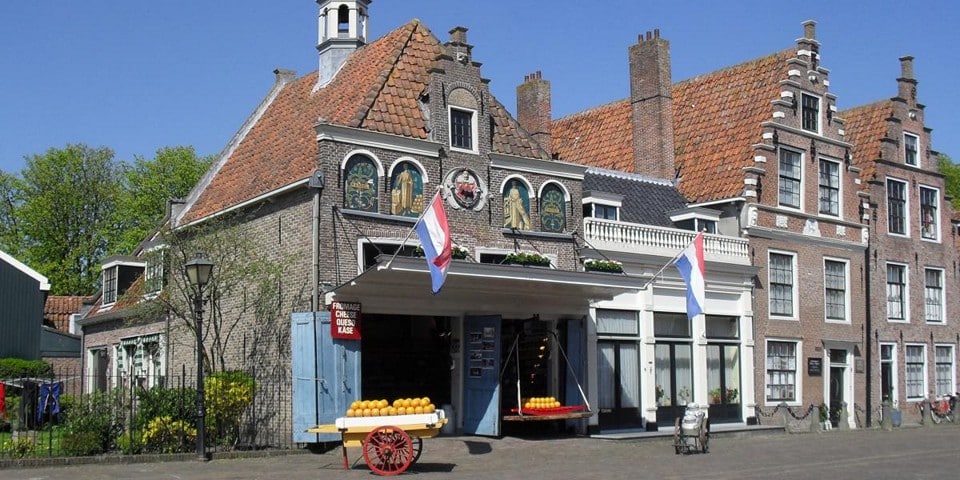 In De Kaaswaag, the visitor can buy different varieties of Edam cheese, see an exhibition dedicated to local cheese products, learn the differences between factory and farm-made cheeses.

Every Wednesday in July and August, outside the store, with bells ringing, the cheese market (De kaasmarkt Edam) opens. It is worth noting that the cheese market, where farmers have come to trade cheese for centuries, was closed in 1922, and reopened especially for tourists in 1986. 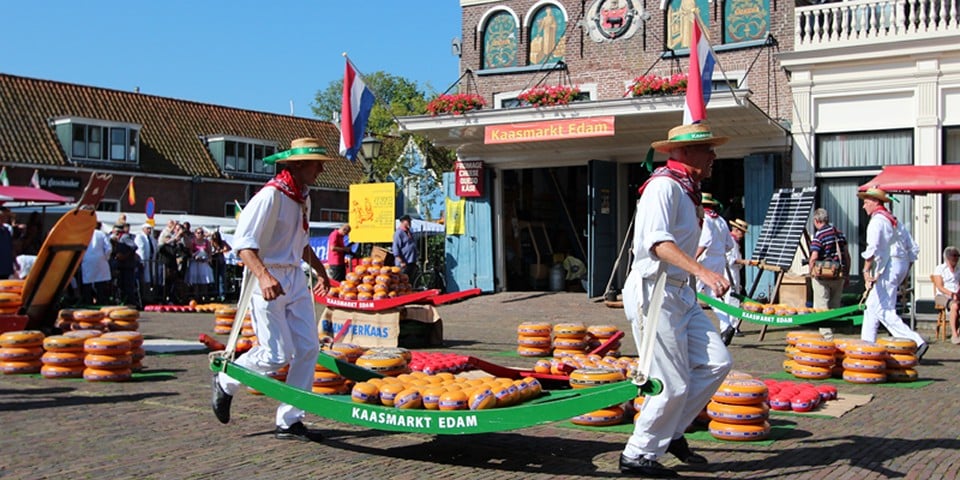 Edam is located 20 km from Amsterdam, so the journey takes just over half an hour. It is convenient to get here by bus or car. There is no railway station either in Edam or in the nearby Volendam.

In Amsterdam, near the Amsterdam Centraal train station, there is the Centraal Station IJzijde bus stop. From here to Edam and back there are buses numbered 312,314, 316 every 10-15 minutes. The journey takes 30-40 minutes. There are several stops in Edama itself, so the traveler can, if desired, get off at any of them or get to the bus station. The ticket will cost 4-5 euros.

The bus schedule can be found at the following link:www.ns.nl/en... It should be noted that when setting up the terminal station, you must specify one of the following Edam stops: Spuistraat, Lingerzijde, Gevangenpoortsteeg. On the site you can find out in detail how to get from the railway station to the bus station, which bus to take, how long to go and how much the ticket costs.

From Amsterdam to Edam can be reached in 40 minutes using the N247. To do this, you must first take the s116 towards Nieuwe Leeuwarderweg / N247 (Amsterdam-Noord). On reaching the N247, follow this road towards Lokkemientjeweg (Edam). Continue along Matthijs Tinxgracht and Grote Kerkstraat towards Damplein, the center of Edam.

The sights of Edam are a must-see for everyone who wants to see with their own eyes the homeland of world-famous cheeses. And if you happen to come here in the second half of the summer, you can take advantage of the unique opportunity to be at the real cheese market of the Middle Ages. A floating basement, one of the most spacious churches in the Netherlands, magnificent stained glass windows and other attractions in Edam will also impress curious tourists.