Amsterdam is considered one of the most unusual cities not only in Europe, but also in the world. To understand how and why such an atmosphere developed, just such a lifestyle and perception of the world, one can only learn about the history of the city.

The Historical Museum (Amsterdam Museum), located in one of the oldest buildings in the city, tells one of the most amazing stories about the capital of the Netherlands.

The building was erected in 1414 as the monastery of Saint Lucia. From 1578 until 1960, the building housed a city orphanage. The famous architects of the "Golden Age" of Amsterdam, Hendrik de Kaiser and Jacob van Kampen, contributed to the reconstruction of the building in the 17th century - it became more spacious and was modernized in step with the times.

In the second half of the 20th century, after a major overhaul in 1976, the collection of the Historical Museum was housed here.

Today, 24 halls of the museum, telling in chronological order about the life of Amsterdam and the townspeople, emphasize the uniqueness of the city and country. The halls and courtyards, which emphasize the culture and traditions of the Dutch, pay tribute to the famous and influential residents of the city who have contributed to the development of the country over the centuries.

Inspection of the exposition begins with the history of the city. Before you start exploring the collections, it is recommended that you watch a short, engaging documentary.

You can also take a brochure at the entrance, which will help you navigate the museum, understand the purpose of certain exhibits. A special chip built into the brochure can be attached to the sensor and you will hear a short story about a particular exhibit in a language convenient for you (including Russian).

The history of Amsterdam dates back to 1275, when two fishermen founded a village on the banks of the Amstel River, which did not differ from a dozen of the same in northern Europe. Only with the appearance of the dam did the status of the settlement change. Amsterdam is starting to populate rapidly. 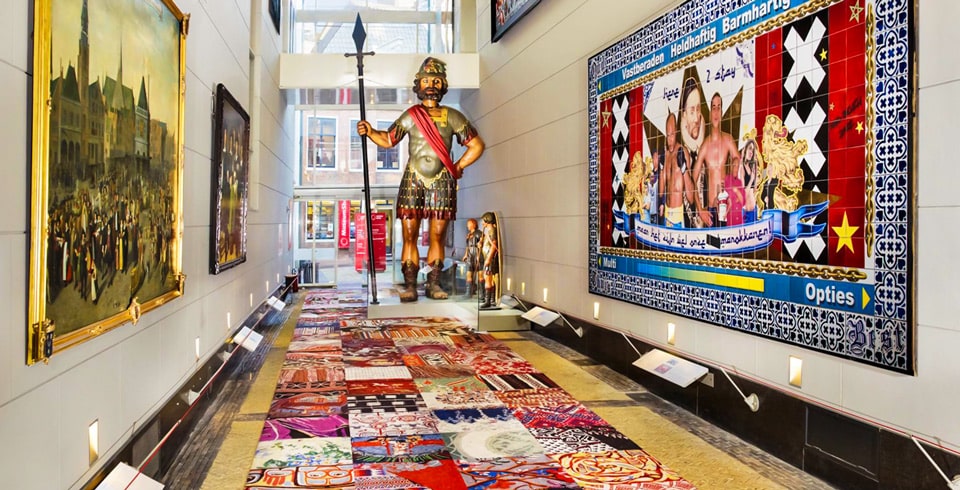 The tour of the museum itself is thought out to the smallest detail. The halls are arranged in chronological and thematic order. The audio guide does not tire with stories about what may not be very interesting to the visitor - you will only hear a story about the exhibit that interests you.

The collection of the museum has several thousand exhibits. Some of them are unique archaeological finds, a lot of household items and everyday utensils dating from different eras, from the 13th century to the present day.

There are very interesting exhibits, for example, a carriage on runners of the 17th century, when the burgomaster went to meet the wishes of the townspeople and forbade wheeled carriages to travel around the city, since such carriages, driving along the cobblestones, created a lot of noise. I had to change to the sleigh even in the summer.

It is curious to see a wooden map of the city, created by the famous master Cornelis Antonis "Amsterdam from a bird's eye view."

Visitors enjoy cycling through the capital of the Netherlands in the 1920s. All you have to do is get on your bike and start pedaling. An interactive walk, filmed with a camera on your shoulder, will bring pleasure and benefit from exercise on a stationary bike.

Much attention is paid to the "Amsterdam miracle". In 1345, a man on his deathbed spat out a cachet. Contrary to logic, it did not burn in the fire. This "miraculous" phenomenon turned XIV century Amsterdam into a place of pilgrimage for thousands of Catholics. That had a favorable effect on the economic component of the city.

It is impossible to ignore the era when the Netherlands were the conquerors of the seas and oceans. Development of manufacturing and industry. A small country in terms of territory gave the world a whole galaxy of famous artists, architects, scientists and inventors. It was not without reason that our Peter I mastered the basics of shipbuilding in Amsterdam, both from the point of view of an ordinary carpenter, and with the study of the foundations and depths of fortification.

Naturally, whole rooms will tell about the "Golden Age" of Dutch art. But no less interesting are the moments of Dutch history associated with bells, wooden shoes, and the rainbow umbrella - the modern symbol of the "Gay Games".

Freedom of morals and rigidity of laws. The museum will explain when and why soft drugs were allowed, when the workers of the red light district were equated with representatives of other professions and forced to pay taxes.

The Museum of the History of Amsterdam, with all the tradition of such exhibitions, does not fit into the general row, like the city itself.